The biggest library in the world, the Library of Congress is a publicly funded archive in the USA with “155.3 million items on approximately 838 miles of bookshelves” (Library of Congress Website). In this research I am going to look more closely into:

The article explains that the digitisation budget for 2012 was $1 million and a reduction of 50% was feared for 2013; however, judging the source, this is exaggerated after research into the fiscal budget. The budget for the National Digital Information Infrastructure and Preservation Program (NDIIPP) indicates a $3.69m actual spend and $3.76m in 2013; although not all of this is on digitisation in its own right. This department however, has applied for $3.84m for 2014, indicating that there is hasn’t been a huge fluctuation in its funding. Furthermore, the Library of Congress has begun a programme to encourage services to be offered for zero price to increase the amount of items to be digitised. The Library of Congress has been digitising since 1994 onto CDs etc, but since 2000 the digitisation has been shifted to the web. In 2007  “it contain[ed] nine million items in more than 100 thematic collections.” Journal. There are lots of current debates about the preservation of digital data: between 1 and 10% CDs from the 150,000 collection are said to have data errors (1). We would expect however, that the number of digitised items has at least doubled in the last 7 years. The Library however, has stated that they would never digitise all of its material: they feel its important to prioritise what is digitised for what researchers etc may need. This raises the debate of “information wants to be free” as the state is curating for its users what it can see and has admitted that not everything will be seen. The LOC is open for physical access; however, if I went from the UK to go look then it would cost me several thousand pounds. The barrier to access is preventing the information to be free and ultimately makes it expensive for anyone to go see, despite the fact that taxpayers have paid for this to be available.  Website Functionality/Design So the Library of Congress has been digitising its online archive for what is now 14 years through Web 2.0. I would have expected to see something a little more modern than this: 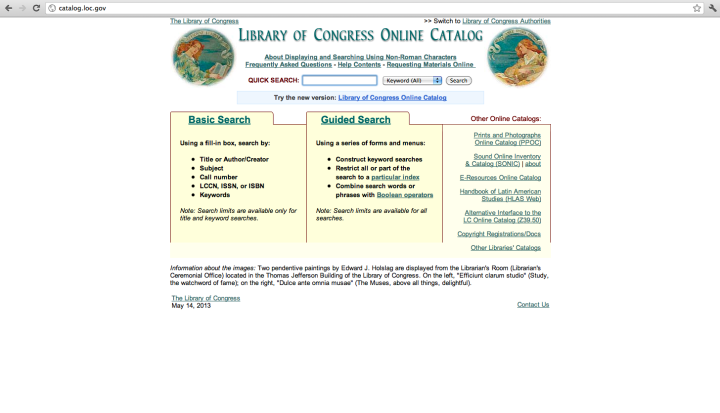 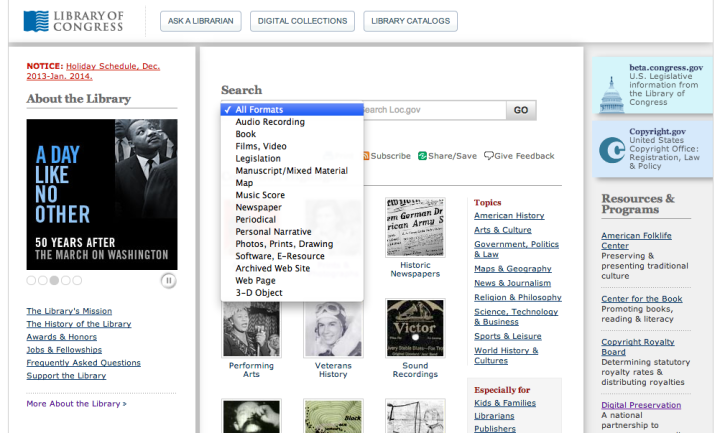 There is a search bar surrounded by blank space in the centre of the page, this replicates a technique used by Google; however, there is a lot of noise around this navigation: the large image to the left and smaller icons scrolling down the page. Regardless, users can use the drop down menu to select what medium they want to search under before entering the keywords. This drop down menu is collapsed content so that it doesn’t clutter the page and overall aesthetics. From this page if I search ‘Kennedy’ up comes a list with icons, titles, collection name, what medium it is and year period.

A user can refine their results by format, date, collection, contributor, subject, location and languages. This is a wide range of refine tools, replicating the richness of the archive; the files have been loaded with metadata in order for it to be found easily. The online interface has been designed so that users can easily find what they’re looking for. Here is the list from the side bar of the result for Kennedy:

This website is very functional: it could do with a little tidying up, however, it is clear that the library also wants users to view other parts of what they are doing, not just for the user to focus on its digitised content. It could be argued that this interface is supportive of ‘archive information wants to be free’; although the public has paid in tax for this to happen, it is a success. The only great concern is that

The final selection of material for digitization is based on its historical, cultural, and educational importance; expected demand; the guidance of internal Library digital policymakers; and the ability of current technology to capture, facilitate access to, and maintain its content.

It makes one wonder who has the right to decide what should and should not be ‘important’. The information that will be left undigitised will become more scarce, more valuable (to some) and more expensive. While the rest of the archive, once users have passed through it, downloaded, uploaded and shared on other websites, is becoming more abundant, less expensive.

Error: Twitter did not respond. Please wait a few minutes and refresh this page.